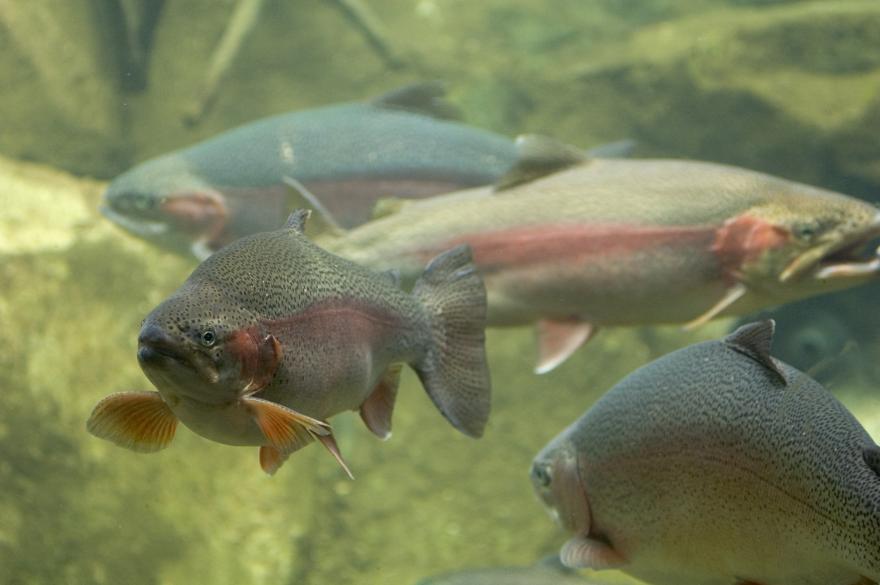 Rainbow trout are native to watersheds west of the Cascade Mountains. They have been introduced elsewhere in North America and on every continent except Antarctica for food and sport fishing. They are omnivores.

Rainbow trout are in the salmon family. The "rainbow" refers to a reddish-pink stripe on the fish's side. Onchorynchus means "hooked nose" referring to the hooklike lower jaw (called a kype) males develop during spawning season.

Rainbow trout are listed as not threatened.

Rainbow trout, the Oregon Zoo and you

You can see rainbow trout at the zoo's Eagle Canyon exhibit. They are fed trout chow and insects. Rainbow trout and other fish in the salmon family require clear, silt-free waters for spawning.

Building dams, filling in wetlands and straightening rivers' courses are all human activities that alter river habitats and can negatively affect trout and other species.

Metro's voter-approved Natural Areas Program has protected more than 90 miles of rivers and streams in the Portland region. Find out how Metro is working to conserve and restore habitat for native fish and other wildlife.